Bengal’s power to deny consent to the CBI is not absolute: from the Center to the Supreme Court

Daily NEWS Summary | 22-10-2021; The Center told the Supreme Court that the Mamata Banerjee government in West Bengal did not have “absolute” power to prevent the CBI from investigating crimes within the state.

The Center said that “no power, not even the government of the Union”, has the power to disturb the autonomy of the first body to carry out investigations, especially in the cases of post-election violence that were transferred to it by the Calcutta High Court in which the state police are under a cloud.

The Union Government, through the Personnel and Training Department, was responding to a complaint made by the Government of West Bengal against the Union of India under article 131 of the Constitution. The state has challenged the jurisdiction of the CBI to register FIRs and conduct investigations within the state in a myriad of cases. West Bengal said it withdrew its “general consent” to the CBI in 2018. The state said the CBI’s actions were a direct attack on the federal government structure and were aimed at harassing the ruling Trinamool Congress leaders in the state.

The case was heard before a courtroom by Justices L. Nageswara Rao and B.R. Gavai on Friday. The judiciary said that the case’s arguments should be heard in detail and handed it over for a hearing on November 16.

“The lawsuit is filed on the basis that the power to deny consent is absolute. This certainly cannot be the case … ”said the Center.

In its affidavit, the Center, while maintaining that West Bengal’s power to deny its consent to the CBI was far from absolute, it accused the latter of having “concealed” information in the Supreme Court that the cases of violence post-election had been transferred to the agency by Calcutta HC.

He said withdrawing general consent would not prevent constitutional courts from referring to CBI cases “in which it is determined that the state police are not conducting a fair and impartial investigation.”

In addition, the CBI was empowered to investigate matters related to one of the central issues listed by the Union in the Seventh Annex to the Constitution. The affidavit indicated that the alleged crimes investigated were violations of parliamentary laws.

“All this would be linked to the laws passed by Parliament … the state government would not have the jurisdiction to use its police force to investigate these crimes,” argued the Center.

Union’s affidavit referred to 12 cases brought to light by the state. He said that these cases also involved corruption crimes against central government employees, etc.

“Many investigations are carried out against central government employees or have a pan-Indian impact or an impact on more than one state with the aim of investigating such crimes. It is always desirable and in the broader interest of justice that the central agency investigates such cases, ”said the Center.

He asked why West Bengal made the “Union of India” the sole party in the Supreme Court case. “The Indian Union has not registered any cases in the state of West Bengal and has not investigated any,” says the 61-page affidavit.

The Center said West Bengal “strangely had not made the CBI part of the lawsuit.” Actions under section 131 are brought exclusively before the Supreme Court with respect to disputes between states, or between the Center and the state.

The Center said that since the Union of India had nothing to do with the case and the CBI was an autonomous body not controlled by the Union government, the lawsuit was misplaced and should be dismissed. The Supreme Court issued an opinion on the lawsuit in early September. The state government, in its plea, requested the suspension of the FIR investigation presented by the IWC.

Daily NEWS Summary | 22-10-2021; The Bhima Koregaon Commission summoned IPS Param Bir Singh and Rashmi Shukla to appear as witnesses to the caste violence that took place on January 1, 2018 in Pune.

The Commission is a judicial inquiry that was appointed in February 2018 after violence erupted when Dalits were attacked as they celebrated the 200th anniversary of the battle against the Peshwas that the British won with the help of Dalit soldiers.

The commission, headed by JN Patel, retired chief of the High Court of Calcutta and Sumit Mullick, former chief clerk of Maharashtra, issued a subpoena on Friday to Singh, who was the additional director general of the police (law and order) in 2018, and to Shukla, who was the Pune Police Commissioner.

They are expected to respond to the summons before November 8, 2021. To date, several extensions have been granted to the Commission and more than 35 witnesses have appeared before it. “However, the evidence continues to evolve and several state and police officials are expected to testify soon,” Commission lawyer Aashish Satpute told.

79 cases registered under the law of illegal conversion to U.P

Daily NEWS Summary | 22-10-2021; Of the 79 cases registered against the illegal conversion under the 2020 law in Uttar Pradesh in July this year, indictments were filed in 50 cases, while the final report was submitted in seven cases, according to a filing document by the state government at Allahabad High Court.

Of the 79 FIRs, the investigation was ongoing in 22 cases, the state government said in a counter-affidavit in response to a group of PIL challenging the 2021 law prohibiting illegal conversion of religion. of Uttar Pradesh (old ordinance of 2020).

Of the 79 FIRs submitted up to July 7, the majority was recorded in Bareilly Zone 21, followed by Meerut Zone 15, Gorakhpur Zone 12, Agra 7 and Prayagraj Zone 5. The cases in which the final report was submitted include the Moradabad case last December, when the husband of a Hindu woman Pinki who was pregnant was arrested under the law. The woman, who was temporarily in a government shelter, reportedly suffered a miscarriage which sparked outrage over the case.

Her husband Rashid and brother were arrested upon arriving at Kanth’s marriage registration office following a complaint from Pinki’s mother, who claimed that Rashid had instigated her to marry and converted her under pretext to provide him with a job. Later, in her statement to a magistrate, Pinki said they were married by consent since they were both adults.

The final report was also placed in the Shahjahanpur case, where five people, including two Christians from Tamil Nadu and two Dalits, were registered under the ordinance on the complaint of Ram Lakhan Verma, a municipal coordinator of Bajrang Dal. Verma had alleged that they were trying to get him and others to convert to Christianity by promising jobs and free education for the children. The defendants were also beaten by members of the right-wing group.

However, the defendants denied the charges and said they were only attending a musical prayer service in a wedding garden on January 3, 2021 to mark the first Sunday of the New Year.

In providing data under the new law, the state government’s affidavit stated that “the assertion that there is no official data available to support the assertion that the social fabric is threatened by [forced conversions] is fallacious, ill-conceived, not admitted and denied. “

The new law makes religious conversion a recognizable and non-surety crime, and provides for sentences of up to 10 years in prison if it is determined that it is carried out by marriage or by false declaration, force, undue influence. , coercion, seduction or other means allegedly fraudulent.

One dead in tower fire in southern Mumbai

Daily NEWS Summary | 22-10-2021; One person died after falling from the 19th floor and 16 others were rescued after a fire broke out in the 60-story Avighna Park in the Curry Road area of ​​south Mumbai around noon on Friday. The fire was extinguished overnight and the municipal commissioner of the Brihanmumbai Municipal Corporation (BMC) ordered an investigation based on complaints from other residents of the skyscraper.

Arun Tiwari, 30, worked as a security guard in the building and was present on the 19th floor when furniture work was being done on one of the apartments. He “panicked and ran to the window that he was trying to hang from outside. But he fell. He was rushed to the KEM hospital, but he was pronounced dead upon his arrival, ”said a firefighter.

Mumbai Mayor Kishori Pednekar said tower staff should have been quick to evacuate and help immediately after the fire broke out as firefighters were on their way.

“If they had acted, the man could have been saved,” he said. Pednekar added that residents have complained against the Avighna Park developer for not cooperating on land grants and other issues. “This has caused a delay in several security-related issues at the tower and the result is today’s incident,” he said.

City Commissioner Iqbal Singh Chahal said city officials had taken note of residents’ complaints. “An administrative investigation will be conducted and action will be taken on this basis,” he said.

The fire started around 11:45 a.m. A total of 40 vehicles, including 14 fire trucks, nine jumbo jets, a control room vehicle, and an elevator were at the scene. The fire was brought under control around 3:30 p.m. and it closed completely around 4:58 p.m.

The month-long winter session of Parliament is expected to start from the fourth week of November following all COVID-19 protocols, parliamentary sources said. The session, which is expected to consist of around 20 sessions, will end before Christmas, they said. As a result of the pandemic, the winter session of Parliament did not take place last year and all subsequent sessions (budget and monsoon) were shortened due to Covid. Although an official decision has not yet been made, sources indicated that the session could start from November 29 and end around December 23. 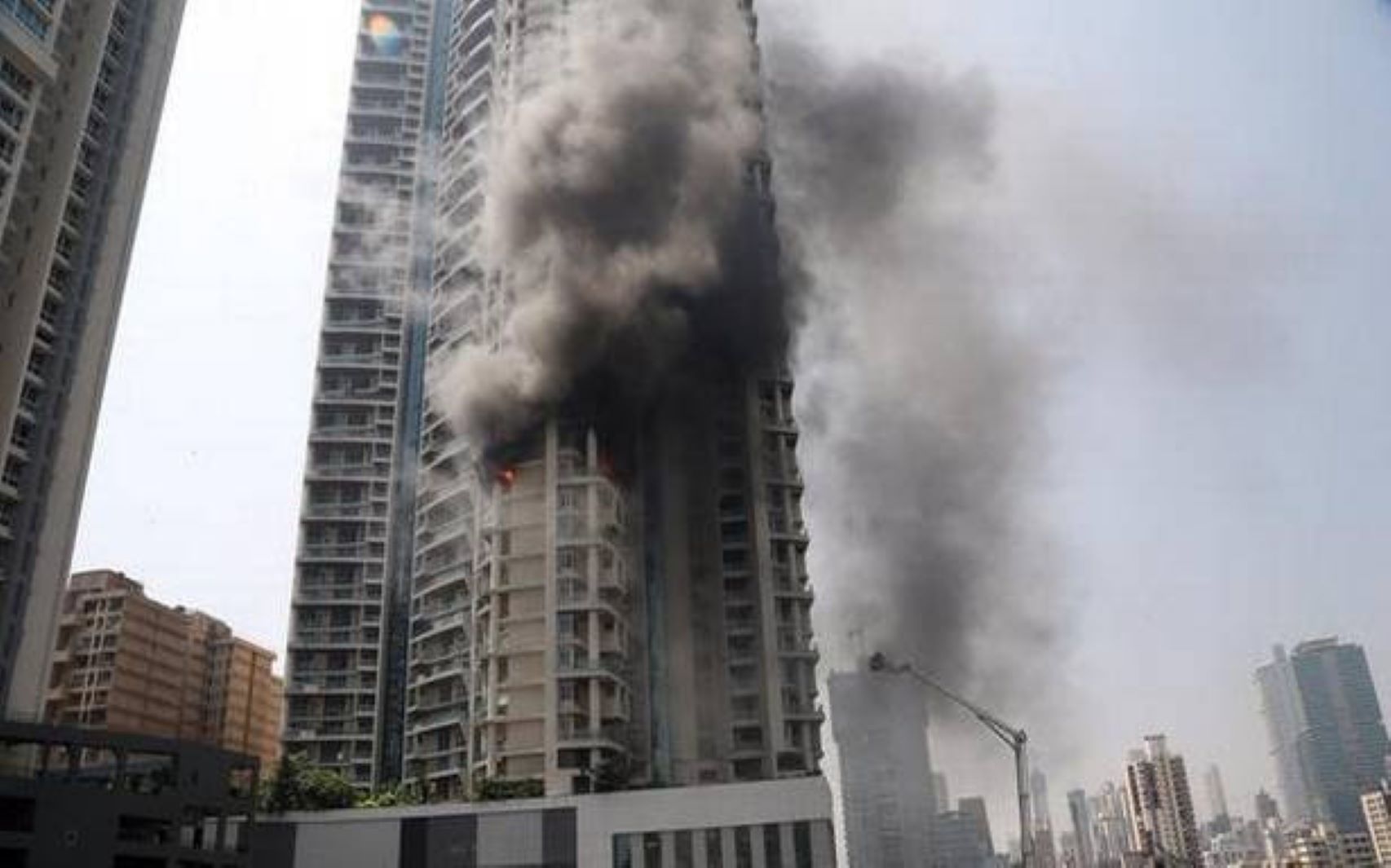