Daily NEWS Summary | 08-10-2021; Supreme Court said that the determination of the Uttar Pradesh government to fairly investigate the violence and deaths of Lakhimpur Kheri, including the murder charges against the son of a Union minister, appeared to fail.

“His seriousness is only in his words and not in his actions,” Chief Justice of India (CJI) N.V. Ramana told the government. Justice Hima Kohli told the state: “There is an old adage that rings true in this situation: the proof of the pudding is in eating …”

Judge Surya Kant, on the bench, told the state: “This is a case of the brutal murder of eight people, the law must run its course against all the accused.” The court said it was not satisfied with the government’s progress report on the investigation.

Chief Justice Ramana noted that even a state-formed special investigation team consisted of “local” police officers, inspectors, police commissioners and a DIG. The court asked if the state had ever asked the CBI to take over the case. Salve answered negatively.

After a pause, the court itself expressed doubts about the transfer of the case to the IWC. “The CBI is not a solution because of the people involved …” Chief Justice Ramana told Salve. The “persons involved” may have referred to the connection of the matter with a central minister.

Salve began his comments by saying that a “young man”, apparently Ashish Mishra, son of the Union Home Minister of State Ajay Mishra, was “the target”.

Ashish is accused of gunning down a farmer while he was trying to escape the agitated farmers after they were struck by vehicles from the minister’s convoy. “The charges are serious,” Chief Justice Ramana told Salve. The latter said that he had sent a notice to Ashish, asking him to report to the police before 11 am “tomorrow.” “If the person does not come, the rigor of the law will take its course,” he assured.

The CJI asked dryly: “Is this how you treat other defendants?” Do you like to send notices, etc.? “

Salve said the state informed him that the victim’s autopsy report showed no gunshot wounds. “That is why a notice was issued. If the allegations are true, this is certainly a [murder] case under section 302 of the IPC, ”he said.

After talking for a while, the CJI addressed Salve: “This is the opinion of the Judiciary … As a responsible state government with a system and a police force, when there is a serious complaint of death or gunshot wounds, does any other accused in this country will be treated in the same way?

Salve noted that investigators had found two cartridges and “may have aimed wrongly.” Chief Justice Ramana told Salve: “This is an extremely serious problem, you are not doing it the way you should… Imagine, what is the message we are sending? Under normal circumstances, a 302 IPC case will be logged. The police will come out and arrest this person. “

The lead attorney urged the court to give the state a little more time to correct the flaws in the investigation. He said it would all fit together in a day or two. He would speak to the Minister of the Interior and the DGP.

“They [the state] should have done what was necessary … They have to make another pudding and make it palatable,” Salve agreed with the court. He said the court could register the case immediately when it reopens after the Dussehra recess. The judiciary released the case for October 20 as the first item on the list.

“We respect you, Hail. We hope that the State will take the necessary measures ”, observed the CJI.

Bomb kills at least 100 at Shiite mosque in Kunduz, Afghanistan

Daily NEWS Summary | 08-10-2021; An apparent shelling of worshipers at a Shiite mosque in the Afghan city of Kunduz killed at least 100 people on Friday, in the bloodiest assault since US forces left the country.

Dozens of people from the minority community were injured in the blast, which has not been reported but appears designed to further destabilize Afghanistan after the Taliban takeover.

A medical source from Kunduz Provincial Hospital said 35 dead and more than 50 injured had been transported there, while an employee at a Doctors Without Borders hospital reported 15 dead and several more injured.

Taliban spokesman Zabihullah Mujahid previously said that an unknown number of people were killed and injured when “an explosion occurred at a mosque of our fellow Shiites” in Kunduz.

There was no immediate claim of responsibility for the attack, but the Taliban’s arch-rival group, Islamic State, claimed responsibility for similar recent atrocities. Residents of Kunduz, the capital of a province of the same name, told AFP that the blast hit a Shiite mosque during Friday prayers, the most important of the week for Muslims.

Kunduz’s location makes it a key transit point for economic and commercial exchanges with Tajikistan. It was the scene of fierce battles when the Taliban returned to power this year. Often targeted by Sunni extremists, Shiite Muslims have suffered some of the most violent attacks in Afghanistan, with rallies bombed, hospitals attacked and commuters ambushed.

Shiites make up about 20% of the Afghan population. Many of them are Hazara, an ethnic group that has been heavily persecuted in Afghanistan for decades. In October 2017, a single Islamic State suicide bomber attacked a Shiite mosque as worshipers gathered for evening prayers in western Kabul, killing 56 people and wounding 55, including women and children.

Daily NEWS Summary | 08-10-2021; The Nobel Peace Prize 2021 was awarded to journalists Maria Ressa from the Philippines and Dmitry Muratov from Russia. The Norwegian Nobel Committee cited its fight for freedom of expression and stressed the vital importance of promoting peace.
“Free, independent and fact-based journalism serves to protect against abuse of power, lies and war propaganda,” said Berit Reiss-Andersen, chairman of the committee. “Without freedom of speech and freedom of the press, it will be difficult to successfully promote brotherhood among nations, disarmament and a better world order for success in our time,” he said.
In 2012, Ressa co-founded Rappler, a news site that focused “critical attention on the (President Rodrigo) Duterte’s controversial and murderous anti-drug campaign,” the Nobel committee said.

She and Rappler “also documented how social media is used to spread fake news, harass opponents and manipulate public discourse.” Reacting to the news, Ressa told Norwegian channel TV2 that “the government (of the Philippines) will obviously not be happy”. “I’m a little surprised. It’s very moving,” he added. “But I am happy on behalf of my team and I want to thank the Nobel Committee for recognizing what we are going through.”
Muratov was one of the founders of the independent Russian newspaper Novaya Gazeta in 1993. “Novaya Gazeta is today the most independent newspaper in Russia, with a fundamentally critical attitude towards power,” said the Nobel committee. “The factual journalism and professional integrity of the newspaper have made it an important source of information on the reprehensible aspects of Russian society which are rarely mentioned by other media,” he added.
The Nobel committee noted that since the launch of Novaya Gazeta, six of its journalists have been killed, including Anna Politkovskaya, who covered Russia’s bloody conflict in Chechnya.
Kremlin spokesman Dmitry Peskov called Muratov “a talented and courageous person”.
“We can congratulate Dmitry Muratov, he has always worked according to his ideals,” Peskov said on a conference call with journalists after the announcement of the award.
Reiss-Andersen noted that the Peace Prize has been awarded to journalists in the past, including Ernesto Teodoro Moneta from Italy, who was cited in 1907 “for his work in the press and at meetings for peace” . In 1935, Carl von Ossietzky received the award “for his ardent love for freedom of thought and expression” after revealing that Germany was secretly rearming after World War I.
Reiss-Andersen also highlighted the risks to free speech in today’s world due to the spread of fake news, noting that Ressa criticized Facebook’s role in manipulating public debate.
“The transmission of false news and information that is propaganda and falsehood is also a violation of freedom of expression, and all freedom of expression has its limits. It is also a very important factor in this debate, ”he said.

Covid Updates The number of reported coronavirus cases in India was 3,39,32,738 at the time of this bulletin’s publication, with the death toll at 4,50,373. 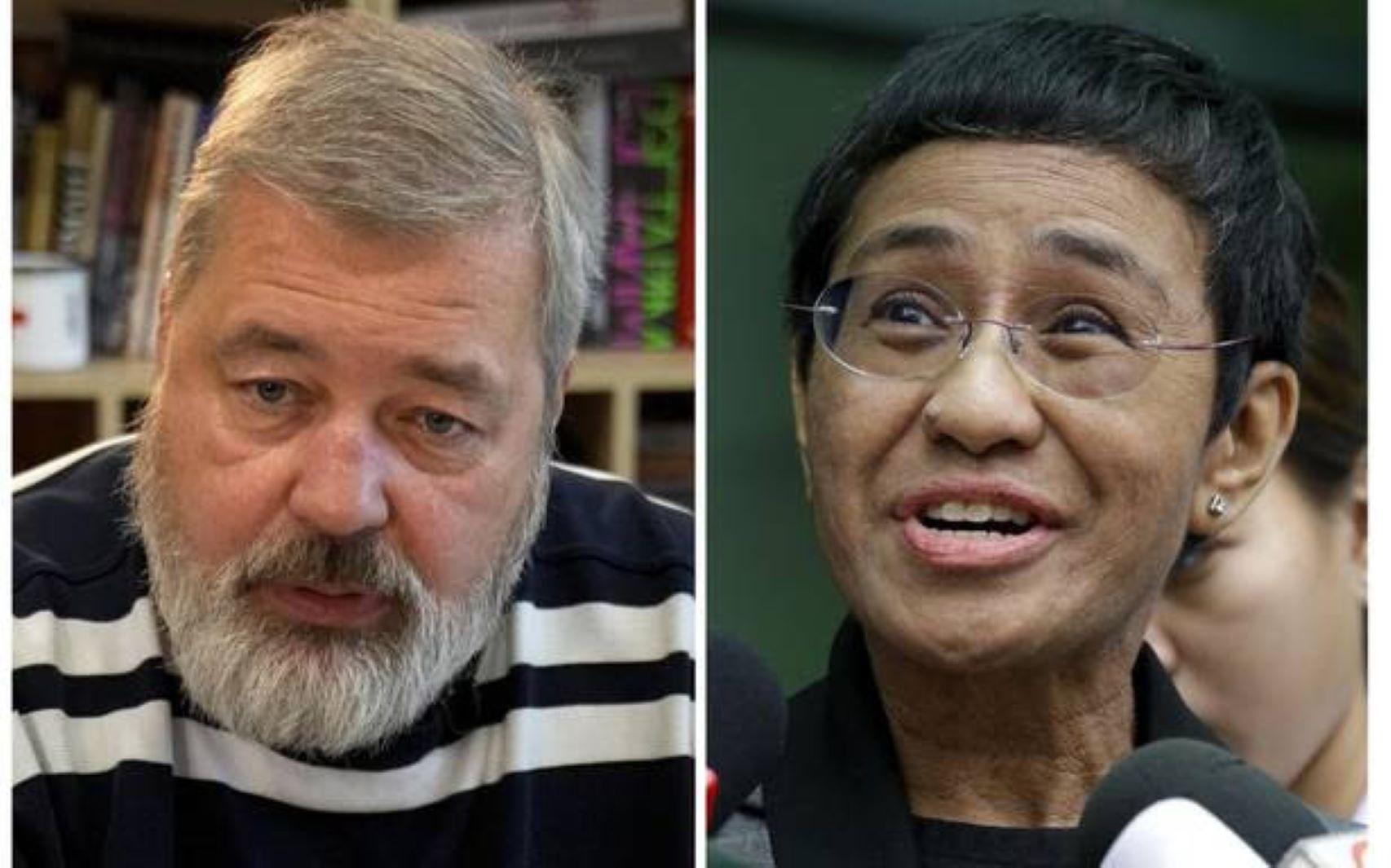