The disclosure took place when the Chief Justice advised Chief Advocate C.U. Singh, who represented one of the claimants in the Pegasus case, said the court wanted to approve the orders in the case this week but could not because some of the members he had selected for the committee were not not available for personal reasons. Chief Justice Ramana said the court will now approve the orders in the Pegasus case next week.

CJI asked Singh to brief the other lawyers on the case. While the case was reserved for an interim order on September 13, the court said it would rule within the next two to three days.

The court had decided to go ahead with an interim order after the government expressed reservations about submitting a “detailed” affidavit in response to the allegations. The Center had said this would be public and jeopardize national security. The petitioners had requested an affidavit from the cabinet secretary or that the court form a committee headed by a sitting judge to investigate the espionage controversy.

A bench of Supreme Court Chief Justice Ramana and Justices Surya Kant and Hima Kohli made it clear on September 13 that there would be no more “beating around the bush” on the issue. CJI had said the court gave the government a fair opportunity to present a detailed affidavit in order to get a clear idea of ​​its position in the Pegasus case.

Daily NEWS Summary | 23-09-2021; Villagers have lost access to a large grazing area near Gogra in eastern Ladakh due to the growing Chinese presence in the area, said Konchok Stanzin, a Chushul adviser.

Gogra is one of the many sticking points in eastern Ladakh where Indian and Chinese troops have been fighting since April-May 2020. Troops have withdrawn from the northern and southern shores of the Pangong Tso and Gogra area, creating “zero zones” in areas along the unmarked Line of Actual Control (LAC) which was regularly patrolled by Indian troops before April 2020.

Stanzin told that the army blocked villagers’ access to Kiu La Pass which, until a few years ago, was frequented by villagers from Lukung, Phobrang and Yourgo for herding cattle.

He added that the neighborhood does not have a telephone or internet connection and that residents decided to go there on their own. Since April 2020, Chinese troops have prevented Indian troops from reaching at least 10 Patrol Points (PPs) in eastern Ladakh, from the Depsang Plains in the north to Lake Pangong Tso in the south. In total, there are more than 65 PP from the Karakoram base in Chumar.

Stanzin said China has built permanent structures and roads near the LAC, while the Indian side can only boast a few roads. “There is no mobile connectivity in the border areas and, despite repeated calls, the administration has not acted. It’s frustrating. They fix phone lines for a few hours each time a VIP arrives. He will come back to the starting point once they are gone, ”he said.

On April 2, the Defense Ministry in a communication to Stanzin said: “Due to the current operational situation in Ladakh, pastoralists have been urged to restrict their movement of livestock.

Family members of people who die by suicide within 30 days of being diagnosed with COVID-19 can get financial help, MHA told SC

Daily NEWS Summary | 23-09-2021; The Home Ministry (MHA) on Thursday informed the Supreme Court that families of people who died by suicide within 30 days of a positive COVID-19 diagnosis would be eligible for financial assistance under the Management Act.

The statement came against the backdrop of guidelines issued by the National Disaster Management Authority (NDMA), which recommended 50,000 rupees each as gratis assistance to the families of those who have died from the virus. NDMA proposed that states provide money from their National Disaster Response Fund.

At the previous hearing in the case on September 13, a chamber of judges MR Shah and AS Bopanna urged the government to consider an ex gratia payment to the families of those who committed suicide, unable to bear the impact of a positive diagnosis of COVID-19.

On Thursday, Attorney General Tushar Mehta, who appeared for the ministry, emphasized that these families also had a “right to benefit from financial assistance under the SDRF” in accordance with the 9/11 NDMA guidelines the ex gratia payment of 50,000. If the person committed suicide within 30 days of testing positive, the person should be considered to have committed suicide due to COVID-19, he said.

During the hearing, the court suggested that proposed committees to be formed at the district level under NDMA guidelines to handle death certification complaints should be able to directly access hospital medical records to verify COVID-death claims. 19. This would help resolve cases where families ask for ex gratia help but do not have a medical record of COVID-19 treatment to show. The court would issue formal orders on the NDMA guidelines on October 4.

Two residents shot to death during an eviction campaign in Darrang district, Assam

Daily NEWS Summary | 23-09-2021; Two people were killed and at least ten others, most of them police officers, were seriously injured on Thursday when the force fired on protesters demanding the rehabilitation of 800 families evicted by the Darrang district administration in Assam and the ensuing clash between both sides, police said.

The evicted families had launched a protest in Sipajhar demanding that the eviction stop and that they receive a full rehabilitation program. The riots broke out when a crowd of protesters, who were armed with sharp weapons, began throwing stones and attacking police officers and people present at the scene, said Darrang Police Commissioner Sushanta Biswa Sarma.

The police opened fire in self-defense, killing two people, both civilians. This led the two sides to clash and at least 10 other people were injured, she said. Most of the injured were police officers, and the doctors treating him described the condition of a Deputy Inspector Moniruddin as critical. He was transferred to the Gauhati Medical College Hospital, he said.

The dead were identified as Saddam Hussein and Sheikh Forid, Sarma said. Then the situation was brought under control and the crowd dispersed. Evictions are ongoing in the villages of Dholpur I and Dholpur III despite the tension in the area following clashes with the police.

Chief Minister Himanta Biswa Sarma told Guwahati that the ongoing deportation campaign would not be stopped. “The police are tasked with clearing the land of illegal invaders and will continue until the job is done.”

The eviction will stop after dark and resume on Friday, he added. The Darrang district administration cleared 602.04 hectares and evicted 800 families since Monday and demolished four religious structures built “illegally” in Sipajhar, authorities said.

The prime minister visited the region on June 7 and inspected the riverine areas allegedly invaded by “illegal settlers” near the Dholpur Shiva temple and ordered the district administration to clear the area for community agriculture.

Daily NEWS Summary | 23-09-2021; A 20-year-old student was killed in broad daylight by a man near the Tambaram station in Chennai on September 23. The young man, who had known the victim for a few years, also tried to commit suicide but was arrested by the public. He was later turned over to the police.

A senior Chennai police officer said that Shwetha, a graduate student from Madras Christian College in Tambaram, was on his way home when the defendant Ramachandran, who worked in a private company in Maraimalai Nagar, wanted to speak with him near the railway quarters. located on the east side of the station.

Although Shweta, a resident of Chromepet, had known him for a few years, the relationship was over. They had a verbal argument in which Ramachandran took a small knife that she had hidden in her bag and stabbed her.

Hearing her cries, locals rushed to rescue her. Meanwhile, the 25-year-old accused also attempted suicide, but was arrested by the public. Before people could even take the victim to a nearby hospital, she died, the officer said. Tambaram police rushed to the scene of the crime and arrested the accused Ramachandran, from Nagapattinam. The victim’s body was sent to Chromepet Government Hospital for an autopsy. Senior police officers have inspected the crime scene and are investigating.

Prime Minister Narendra Modi arrived in Washington on Wednesday for an official visit to the United States during which he will hold the first face-to-face meeting with President Joe Biden and his deputy Kamala Harris, will attend the first Quad summit in person and will address him. the 76th session of the United Nations General Assembly in New York. 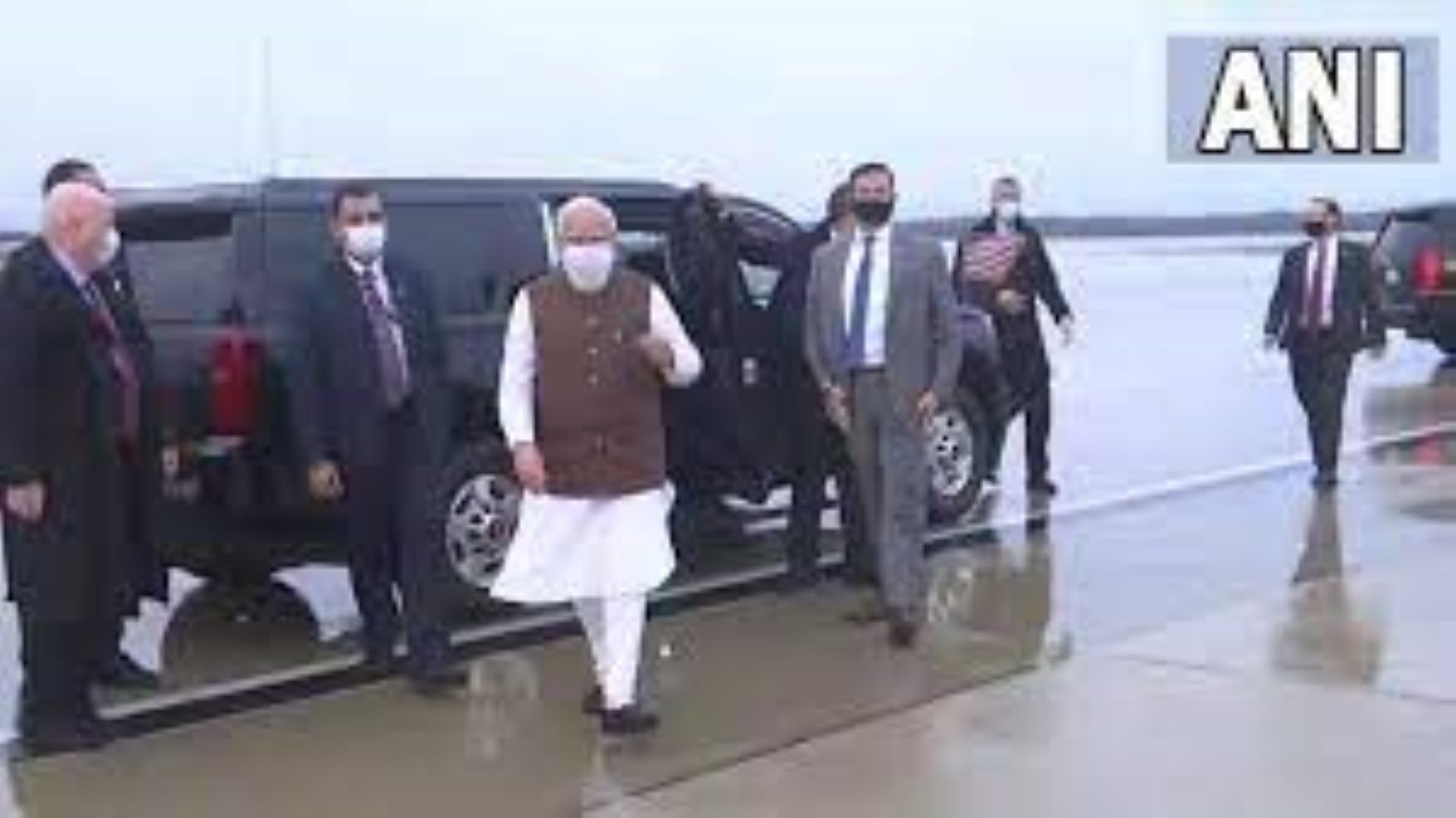