Duty of public intellectuals to expose the lies of the state: Justice Chandrachud

Daily NEWS Summary | 28-08-2021; Public intellectuals have “the duty to expose the lies of the state,” observed Supreme Court Justice DY Chandrachud, stressing that in a democratic country it is important to control governments and guard against lies.

SC Justice was delivering the 6th Chief Justice MC Chagla Memorial Lecture, when he warned of over-relying on government to provide social, political, economic, cultural and, in today’s context, medical truths. He also stressed the importance of a “free press from all influence political or economic” to ensure that governments can truly be held accountable for their actions and policies.

“We cannot rely solely on the state for the truth. Totalitarian governments are known for their constant reliance on lies to consolidate power, we see there is a growing trend among countries around the world to manipulate COVID-19 data,”Judge Chandrachud said.

His remarks about him follow concerns expressed by experts, activists and journalists that governments may have tampered with Covid data to hide the true spread of infections.

“The phenomenon of fake news is on the rise. The WHO (World Health Organization) acknowledged this during the COVID pandemic, calling it “infodemic”. Human beings tend to be drawn to sensational news which is often based on lies,”he explained.

This is the second time this month that Supreme Court justices have asked the public to be careful. On Independence Day, CJI Ramanna criticized the functioning of Parliament, saying the laws were unclear.

“Now we see legislation with a lot of loopholes and a lot of ambiguity in drafting the laws,” Justice Ramana said at the independence day ceremony hosted by the Supreme Court Bar Association . “We do not know for what purpose the laws are passed which create a lot of litigation, inconvenience and loss for the government and inconvenience for the public.”

Daily NEWS Summary | 28-08-2021; Crowds continued to come to Kabul airport to flee the Taliban as the United States and its allies began to halt the rescue operations. Italy said its last evacuation flight landed in Rome, but that it would work with the United Nations and countries bordering Afghanistan to continue helping Afghans who had worked with its military contingent to leave the country.

“Our imperative must be not to abandon the Afghan people”, especially women and children, Italian Foreign Minister Luigi Di Maio said on Saturday. He said 4,890 Afghans had been evacuated by the Italian Air Force on 87 flights, but did not say how many more were still eligible.

The United States and its allies have said they will continue to provide humanitarian assistance through the UN and other partners, but any broader engagement – including development assistance – will likely depend on the issue. whether the Taliban are keeping their promises of a more moderate regime.

The agency warned that a worsening drought threatens the livelihoods of more than 7 million people. The Rome-based Food and Agriculture Organization said Afghans were also suffering from the coronavirus pandemic and the displacement of recent fighting.

The Taliban deployed additional forces around Kabul airport on Saturday to prevent large crowds from assembling after a devastating suicide bombing two days earlier, as the massive US-led airlift came to a halt before the August 31 deadline.

The agencies reported the new layers of checkpoints that have sprung up on the roads leading to the airport, some manned by uniformed Taliban fighters with Humvees and night vision goggles captured by Afghan security forces. Areas where large crowds of people have gathered over the past two weeks in hopes of fleeing the country after the Taliban takeover were largely empty.

A suicide bombing by an Islamic State affiliate on Thursday killed 169 Afghans and 13 US servicemen, and there are fears that the group, which is much more radical than the Taliban, could strike again. Many Western countries completed their evacuation operations before Tuesday’s deadline for the withdrawal of all US forces.

More than 1,000,000 people have been safely evacuated from the Kabul airport, according to the United States, but thousands more are struggling to leave and may not be able to do so on Tuesday.

In Kabul, hundreds of protesters, including many government officials, gathered in front of a bank while many others lined up in front of ATMs. The protesters said they had not been paid in the past three to six months and that they were unable to withdraw money. ATMs are still working, but withdrawals are limited to around $ 200 every 24 hours.

The Taliban cannot access almost any of the central bank’s $ 9 billion reserves, most of which is held by the New York Federal Reserve. The International Monetary Fund has also suspended the transfer of about $ 450 million.

The Taliban encouraged Afghans to stay in the country, promising amnesty even to those who fought against them. They said commercial flights will resume after the US withdrawal, but it is unclear whether airlines will be willing to offer the service. On the role of women in public life, the Taliban have been silent, raising fears that women will once again be excluded from all public spheres.

Daily NEWS Summary | 28-08-2021; The Enforcement Directorate (ED), which reports to the Ministry of Finance of the Ministry of Finance, summoned the National Secretary General of the Trinamool Congress, Abhishek Banerjee, also a nephew of Chief Minister Mamata Bannerjee, as part of a money laundering and case of coal fraud. It emerged that the DE also summoned Abhishek Banerjee’s wife, Rujira Naroola Banerjee, setting the stage for another confrontation between West and Central Bengal.

Mamata Bannerjee accused the Center of petty and vindictive politics, once again reminding the BJP of the losses suffered in the Assembly elections. “When the BJP government in Delhi cannot compete with us in politics, it uses agencies,” Bannerjee said at a recent public event.

Challenging the BJP to fight his party politically, the prime minister said: “Why are you unleashing the ED against us?

Intensifying the counterattack, Banerjee stressed that the allocation of rights over natural resources such as coal is the responsibility of the central government.

“There is no need to point the finger at Trinamool for coal corruption. It is below the Center. And their ministers? What about the BJP leaders who looted the Bengal coal belt, the Asansol region, ”he said on the occasion of the party’s founding day program.

PTI reports that 33-year-old Abhishek Banerjee, who represents Diamond Harbor constituency in Lok Sabha, was summoned to appear before the investigator in charge of the case in New Delhi on September 6, while his wife Rujira received a similar subpoena as part of prevention of the Money Laundering Act (PMLA) for September 1.

Rujira had already been questioned by the Central Bureau of Investigation (CBI) in this case. Some officers from the Indian Police Service (IPS) and a lawyer linked to Abhishek Banerjee were also summoned on different dates next month in the same case, authorities said.

The Bengal coal smuggling case, which had led to the arrest of several intermediaries, concerns the extraction and smuggling of charcoal worth Rs 20,000 crore across state borders into l ‘Uttar Pradesh, Jharkhand and Bihar, allegedly with the help of collusive government officials. with politicians.

Daily NEWS Summary | 28-08-2021: At the current Tokyo Paralympic Games, rower Bhavinaben Patel is aiming for gold after entering the final by beating Rio Olympics silver medalist Zhang Mia of China in the semifinals of the Women’s Individual Class 4 in Tokyo 2020 Paralympic Games on Saturday.

Bhavinaben won 7-11, 11-7, 11-4, 9-11, 11-8 in a match that lasted 34, to enter the final game for the gold medal. Now she will face world number one Zhou Ying of China. Patel reportedly said: “I do not consider myself disabled, I am always sure I can do anything and today I have also shown that we are not far away and that table tennis is as advanced as other sports. .

“It’s a very, very, very big achievement for me. People say that beating China (in table tennis) is impossible, but today I have shown that nothing is impossible. Anything is possible if you want to do it, ”Bhavinaben said in a video posted to Twitter by public broadcaster Doordarshan.

When asked if she hopes to get this far at the Paralympic Games, Bhavinaben told SAI Media: “No, I just thought that whatever game comes up I have to give my 100%. And that’s what I did. When you give yourself 100%, a medal will come ”. 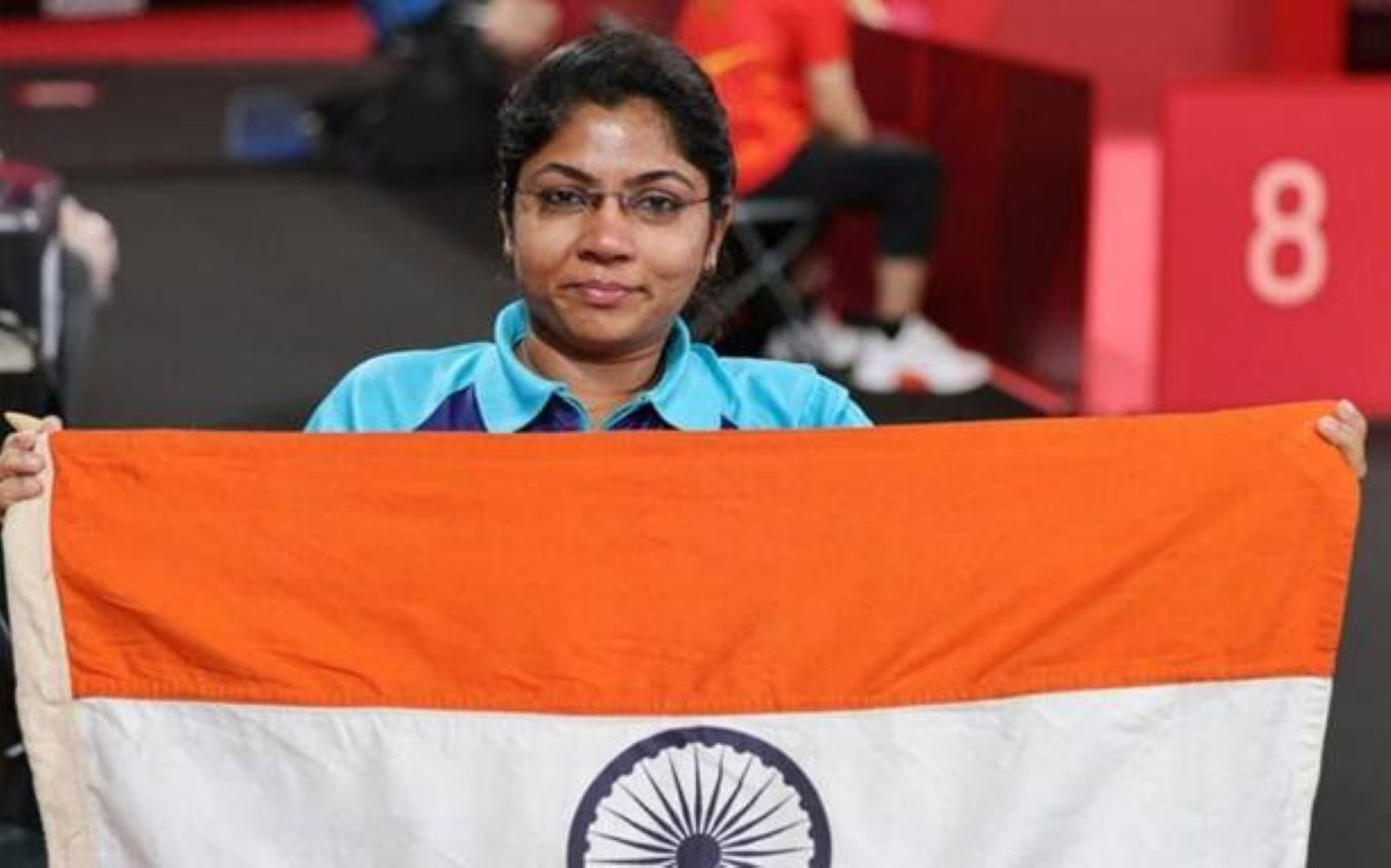