Daily NEWS Summary | 08-08-2021; The Chief Justice of India, N.V. Ramana said that police stations pose the “greatest threat” to human rights and dignity, which are “sacrosanct.”

“The threat to human rights and physical integrity is greatest in police stations … According to recent reports, even the privileged are not spared third-degree treatment,”

Torture in custody and police atrocities continue to prevail despite constitutional guarantees,

The lack of effective legal representation in the police stations is a great detriment to those arrested or detained. The first hours of arrest or detention often decide the fate of the case for the accused, the CJI said.

The Supreme Justice spoke during the launch of the National Legal Services Authority’s Legal Services Application and Vision Statement to Vigyan Bhawan. The CJI had some advice for fellow judges from him.

Chief Justice Ramana noted that if the judiciary wants to win the trust of the poor and vulnerable, it must assure the marginalized that it exists for them.

“If the judiciary wants to win the trust of citizens, we must make everyone feel confident that we exist for them. For a long time, the vulnerable population has lived outside the justice system, ”said CJI.

Long and expensive formal court processes deter the poor and vulnerable. The most difficult challenge for the judiciary today is breaking down these barriers, he said.

Daily NEWS Summary | 08-08-2021; A combination of the Covishield and Covaxin vaccines elicits better immunogenicity than two doses of the same vaccine, the Indian Council for Medical Research (ICMR) said.

The Council published its findings, which suggest that immunization with a combination of an adenovirus vector platform-based vaccine followed by an inactivated whole virus vaccine was not only safe, but also resulted in better immunogenicity.

However, 18 people, as part of the national program, inadvertently received Covishield as their first hit and Covaxin as their second. In their study, the ICMR compared the safety and immunogenicity profile of these people with that of people who received Covishield or Covaxin.

The pre-printed report titled “Fortuitous COVID-19 Vaccine Mix in Uttar Pradesh, India: Assessing the Safety and Immunogenicity of a Heterologous Regimen,” has not been peer-certified and should not be used to guide clinical practice, the council said. .

However, he argued that the results have important implications for the Covid-19 vaccination program in which heterologous immunization will pave the way for the induction of improved and better protection against variant strains of SARS-CoV-2.

These mixed treatment regimens will also help overcome the challenges of particular vaccine shortages and remove vaccine concerns in people’s minds that could be caused by programming ‘errors’, particularly in settings where multiple vaccines are used. Covid-19. However, to conclusively prove these results, a multicenter RCT should be performed, ”said ICMR.

Previously, the World Health Organization warned against vaccine mixing, saying there was very little information on vaccine mixing and pairing. He advised against mixing and matching vaccines from different manufacturers, calling it a “dangerous trend” because little data was available on the health impact.

The Council recognized that their study had certain limitations. “The sample size was small and the participants underwent a short follow-up period of only 60 to 70 days after vaccination with the first dose, and baseline immunological and serological data of the participants were not available,” did he declare.

Daily NEWS Summary | 08-08-2021; Taliban tightened the noose around northern Afghanistan on August 8, capturing three other provincial capitals as they headed for the cities after taking over much of the countryside in recent months.

Insurgents have captured five provincial capitals in Afghanistan since August 6 in a lightning attack that appears to have overwhelmed government forces. Kunduz, Sar-e-Pul and Taloqan in the north fell within hours of each other on August 8, lawmakers, security sources and town residents confirmed.

In Kunduz, a resident described the city as being plunged into “total chaos”. Insurgents said on Twitter in late August that they also captured Taloqan, the capital of Takhar province.

Parwina Azimi, a women’s rights activist in Sar-e-Pul, told AFP by telephone that government officials and the rest of the forces had retreated to an army barracks about 3 km from the town. The Taliban “surrounded” the complex, said Mohammad Hussein Mujahidzada, a member of the provincial council.

Taloqan was the next to leave on August 8, and one resident, Zabihullah Hamidi, told AFP by phone that he saw security forces and officials leaving the city in a convoy of vehicles. “We withdrew from the city this afternoon after the government failed to send aid,” a security source told AFP. “Unfortunately, the city is totally in Taliban hands.”

Kunduz is the Taliban’s most significant advance since the insurgents launched an offensive in May when foreign forces began the final stages of their withdrawal. It is a permanent target for the Taliban, who briefly invaded the city in 2015 and again in 2016, but never managed to keep it for long.

Striking images of the fighting were posted to social media over the weekend, including what appeared to be large numbers of prisoners released from jails in captured towns. The Taliban frequently attack prisons to free jailed fighters in order to reconstitute their ranks.

On August 6, insurgents seized their first provincial capital, Zaranj southwest of Nimroz on the border with Iran, and continued to capture Sheberghan in northern Jawzjan province the next day.

Clashes were also reported on the outskirts of Herat to the west, and Lashkar Gah and Kandahar to the south. The pace of the Taliban’s advances caught government forces off guard, but they were given a respite on Saturday night after US warplanes bombed Taliban positions in Sheberghan.

Daily NEWS Summary | 08-08-2021; Tokyo 2020 Games were declared closed on Sunday by IOC Director Thomas Bach, ending the “most difficult Olympic journey” after a year of pandemic delay and threats of cancellation.

Bach called them “an unprecedented Olympics” when he visited the 68,000-seat Olympic Stadium, which was devoid of fans as Japan struggled to contain a record-breaking coronavirus outbreak.

The Olympic flag was presented to the mayor of Paris, Anne Hidalgo, for the 2024 Games during the closing ceremony in Tokyo. Hidalgo waved the flag, decorated with the five Olympic rings, after receiving it from the IOC President, Thomas Bach.

It marked a low-key end to an extraordinary Olympics which largely took place in empty venues with only athletes, team officials and media in attendance.

The athletes lived under strict biosecurity conditions with social distancing in the Olympic Village and instructions to wear masks unless they were eating, sleeping, training or competing.

Bach described how the IOC had considered canceling the Olympics and claiming the costs of its insurance policy, but said officials decided to hold the Games “for the athletes.”

On Sunday, the culmination of the biggest sporting event since the pandemic, Kenyan Eliud Kipchoge won the men’s marathon and the United States defeated China at the top of the medal table.

The United States took victories in volleyball, track cycling and basketball to top the rankings with 39 gold medals, just one ahead of China.

The Olympics were plagued with weak Japanese support as they unfolded with Tokyo and other areas under a state of emergency and with infections escalating to new heights.

But Japan’s record of 27 gold medals to finish third at the table won hearts. Great Britain ranked fourth with 22 and the Russian Olympic Committee, the team of Russian athletes after the ban on systematic doping in their country, was fifth with 20.

Although the Olympic flag has been passed to Paris, the venue for 2024, the Olympic circus will meet again in just six months when Beijing, facing boycott threats and a new coronavirus emergency, hosts the Winter Games in February. 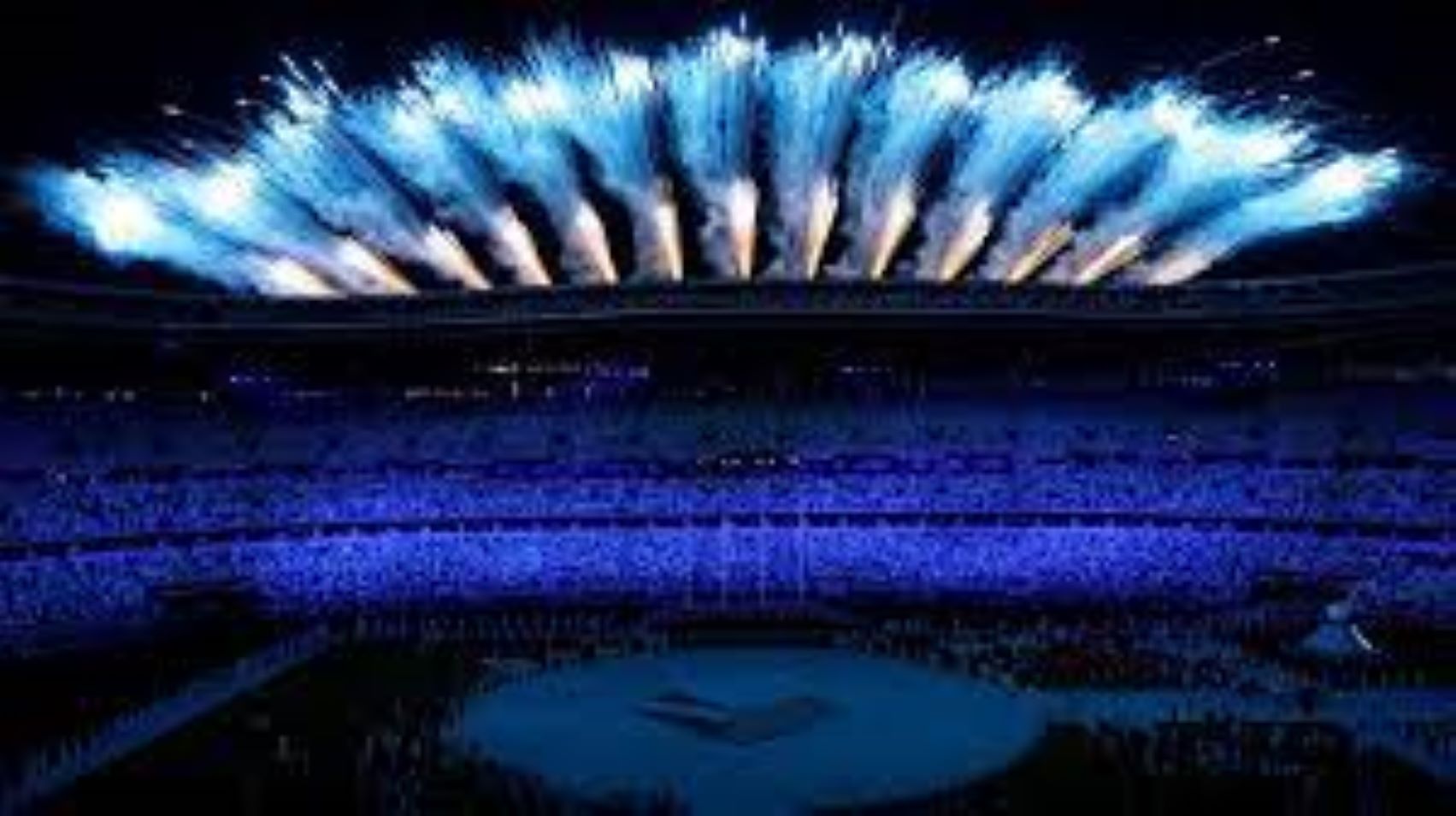